After successfully vanquishing two rounds and four courses during the month of June, July scheduling stayed firmly in the rough until Master Organizer Notable Homosexual suggested a single-course, weeknight outing called “Bonus Round: Tag Team (Back Again)” to squeeze one round in before the month was up. Randomly paired together, competitors had to create coordinating outfits and alternate strokes at each hole (sic) for a combined score and team win.

A brand new GlowGolf course had opened at The Mall at Greece Ridge, so the fuquers took to the shopping center and faced their greatest challenge yet: movable obstacles were setup at random, a few holes were impossible to complete within par, and all the balls were the exact same color (creating even more chaos than usual). In fact, the course took so long to play that, as the mall began to close, the competitors finally called the round after 10 holes and skipped right to the 18th. But not before the arrival of Hurricane Jerome, Team Raver demonstrating their sweet dance moves, Team Goth flipping-the-bird (at least) six times, and mall security warning Team Luchador not to leave the course with their masks on or they’d be… stopped. A nightcap of frozen yogurt ensured that everyone ended day-glo’ed and sugar’ed-up.

Bonus Round competitors at GlowGolf

Eric repeatedly referred to this video as a complete surprise because he didn’t realize I’d shot that much footage at GlowGolf. Which speaks to either: (1) my unicorn stealthiness, (2) Eric’s intense mini-golf focus, or (3) his Luchador mask providing zero visibility. Whatever the case, it was challenging, but fun, to shoot video in the blacklit course, even if it’s sometimes tough to see what’s going on.

I didn’t get the idea for the pixel-art video game segments until Max sent me the Mighty Switch Force game soundtrack, and then I instantly knew that was what I wanted. After designing, printing, and assembling a NES game box and cartridge label (and purchasing a used game to actually use), Willie and I shot his segments between midnight and 2am on a Saturday night in mid-August, and you can watch him get sleepier and sleepier as the footage goes on. Even though Willie owned the NES system, he doesn’t press the cartridge down in this video for fear of it getting stuck. His cat, Midna, did not voice her own lines due to union issues.

The pixel-art animations were a mix of hand-drawn “sprites” (based on character shapes from the SNES game Earthbound), animated in After Effects, and Photoshop and After Effects filter effects applied to footage from this (and prior) tour rounds. The “sprite” versions of everyone were based on actual outfits they wore during the tour rounds – as close as I could do with roughly 20 pixels for a shirt – while the game “mechanics” are loosely based on the original NES game Golf from 1984. Menu screens and the “Fuck Mountain” world map were inspired by Kirby Super Star and Super Mario World (respectively), while sounds were lifted from a variety of sources. The entire process was tedious and immensely time-consuming. I worked on it for a month-and-a-half after we played the round, and it arrived online on September 13, 2013. I have no explanation for the cartoon eyeballs.

Want to make your own “Tour de Fuque” video game box?
Click the link below to open the box image on SmugMug. Click the “Download” button in the lower-right corner to save the JPG to your computer. Print the image on 11×17″ (tabloid) paper. Cut and fold, as seems logical. Glue as needed. Buy yourself a used NES cartridge and stick in the box! 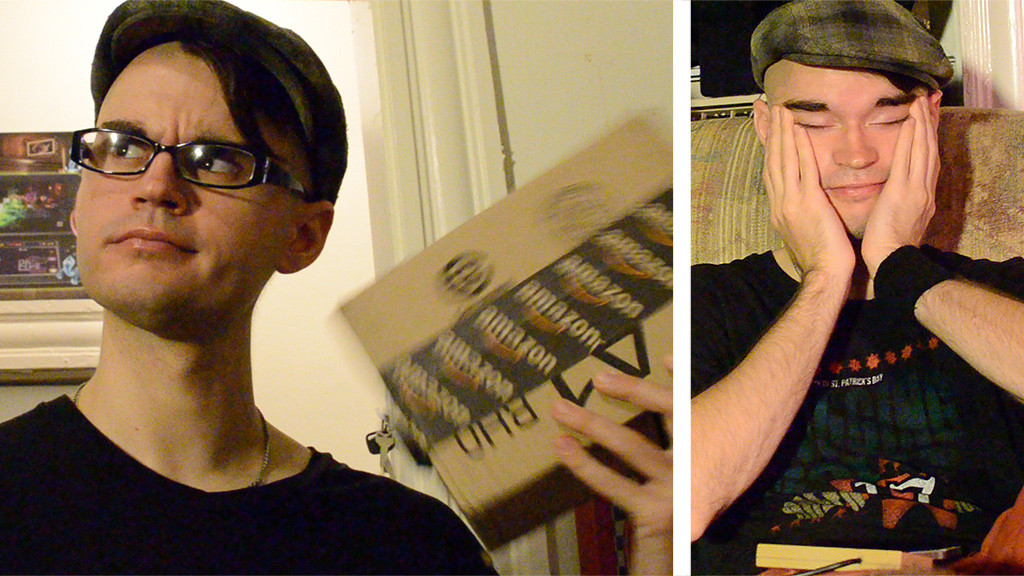